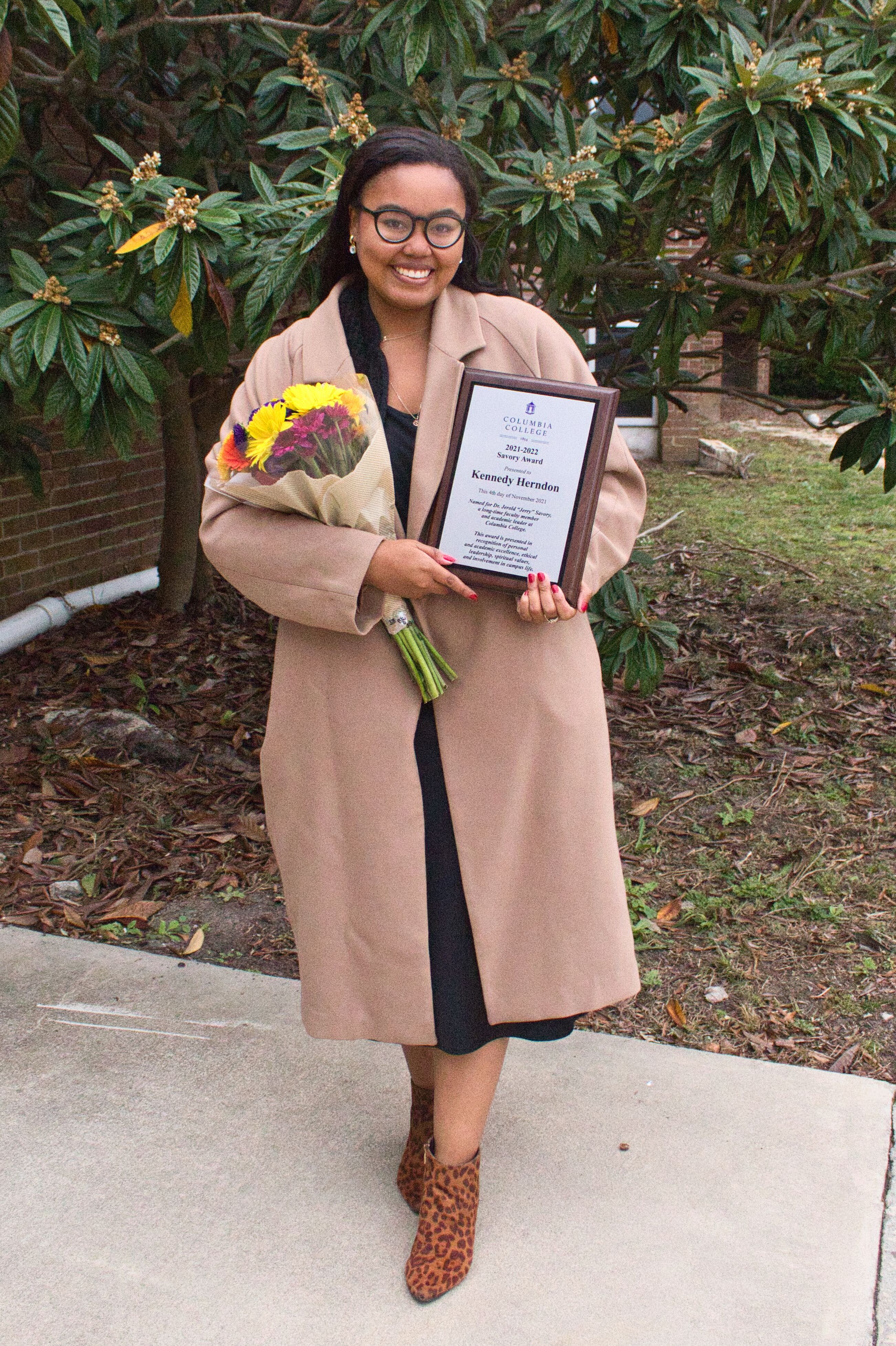 Grateful is the word Kennedy Herndon repeated over and over when reflecting on her feelings after being named the recipient of the 2021-2022 Savory Award. Kennedy is grateful for her time here at Columbia College. She is grateful to have met and learned from professors and peers alike. She is grateful for what her future holds.

After graduation, Kennedy plans to attend law school. She says that Columbia College prepared her for this next step not only academically, but also by giving her the tools to become a leader, a listener, and a collaborator, tools that will certainly serve her well in her career.

Kennedy’s time at Columbia College has been marked by the incredible experiences she has had and people she has met. She reflected on her favorite memories that included things like the annual Christmas Tree Lighting at Alumnae Hall, drinking hot chocolate and lighting candles, and even simple, normal days chatting with one of her best friends between classes by the fountain. These experiences allowed Kennedy to find herself, and she is confident that the women and men that follow in her footsteps will do the same because of the intentional environment she and so many others have experienced here.

Of all the lessons she has learned, skills she has gained, and people she has been inspired by throughout her time at Columbia College, Kennedy says the greatest gift the institution has given her is the immense confidence she has in herself. She gained this confidence through learning the importance of self-love. She hopes that the legacy she leaves here after graduation is one of kindness, not just kindness to others (which she notes is also important), but Kennedy wants to leave a legacy of self-love because self-love leads to confidence, and confidence lends itself to success.

Humble is the most fitting word to describe Kennedy Herndon. Ask anyone who has met her. The first and foremost thought she shared as part of this interview was to name and credit each of the other 2021-2022 Savory Award Finalists for their involvement on campus and how they each inspire her. Her final thought shared was that she does not view the 2021-2022 Savory Award as an accomplishment of her own. Instead, she views it as a testament to the kind of people Columbia College is working to build, an award to honor the work of the institution at large. It is safe to say that character-building is alive and well at Columbia College, just look at Kennedy Herndon.

‘Did not give up’: Three sisters graduate from CC with MBAs on the same day

ROCK HILL, S.C. — They’re years apart in age, but three local sisters graduated with master’s degrees from the same college -- on the same day. Chelsea, Shantel, and Sheena Bell have been taking care...

After 167 years of providing outstanding educational opportunities for women on campus, Columbia College has fully integrated men into their residential experience. August 19 was a monumental day, as...

Columbia College is happy to announce our very own Kennedy Herndon is a 2020 Mayor’s Fellows student. The Mayor’s Fellows program was launched by Mayor Stephen K. Benjamin to foster a continuing investment in developing youth leadership in the City of Columbia.

Columbia College senior, Bre Norton, is making a difference in the Columbia community through service and a commitment to social justice. She's purchasing and receiving donations to provide snacks and drinks to local protestors.