Natasha Seymore: Home for the Holidays 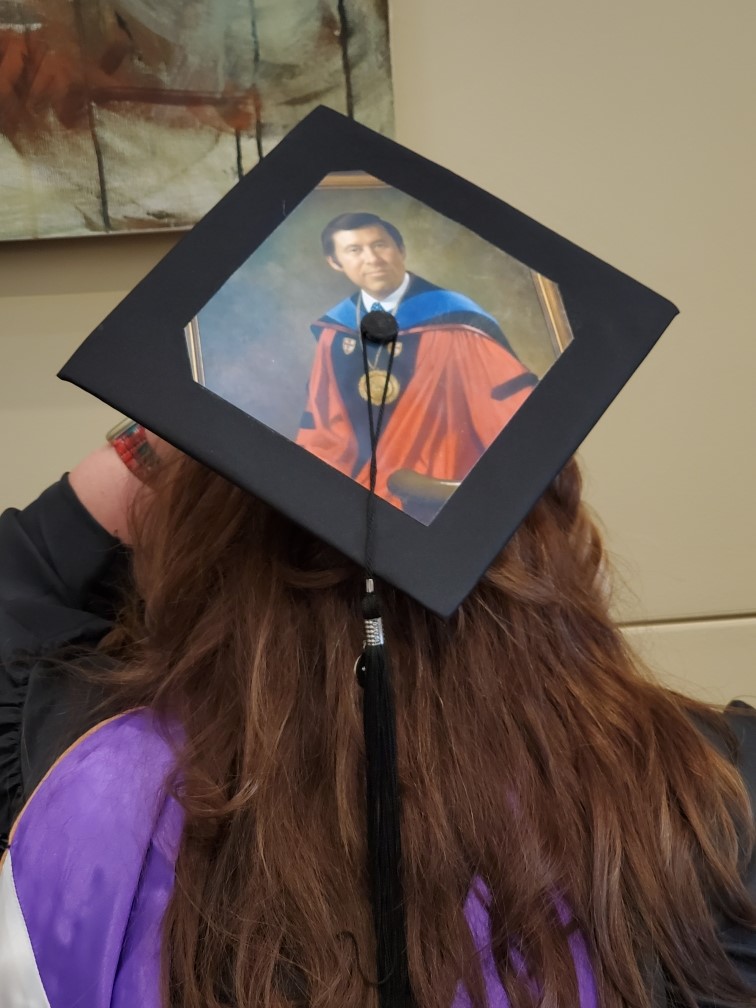 Many will refer to Columbia College as a “home away from home,” but that sentiment holds true in a different way for graduating student Natasha Seymore. She grew up on Columbia College Drive, right next door to her grandmother and grandfather, former President of Columbia College, Dr. Ralph T. Mirse. Natasha’s childhood, while peppered with star-studded introductions like Barbara Bush, Sandra Day O-Connor, and our very own Lucille Godbold was marked with the unique joy that came from being a child on a college campus. To hear her tell it, the campus was her playground. She has memories of (secretly) climbing the Christmas tree after picnicking under the beautifully lit branches during the Christmas season and spending weeks of the summer at camps held at Cottingham Theatre, learning how to speak clearly and articulately. She even obtained her first lifeguard certification in the Godbold Center.

Of all these memories that are etched on her heart, the memories that she holds most dear are the special days after school when her grandmother would agree to drop her off at her grandfather’s office. Natasha would watch him work until he needed a break. Then, she and “Grandaddy,” as she refers to him, would walk down to the Columns. It is there that she remembers so many conversations about Jesus, about school, about anything or nothing, but mostly she remembers them just BEING together. They would stand in the center and he would say, “One day when you graduate, maybe this is where you will have your pictures made.” And now, close to 40 years later, those graduation pictures will, in fact, be made.

When it was time for her to choose a college to attend after high school, Natasha says she was determined to create her own space and go her own way, which initially led her away from the school that now calls her home for graduation. While Natasha wishes that she had gotten a true student experience, she is incredibly proud of what she has accomplished and she believes her grandfather is proud of her as well. Natasha, a life-long healthcare professional, wife, and mother graduated in December with her master’s degree in Business Administration with a Concentration in Hospital Administration, and for her, this degree is about fulfilling a promise she made long ago. The Online MBA Program made fulfilling this promise a possibility for her at age 50, living in Clinton, SC, while working full-time in Greenwood, SC, and managing a family. Natasha has had every reason NOT to fulfill the promise she made, but at the close of the semester, she received her diploma after maintaining nearly a 4.0 grade point average.

With a lifetime of memories growing, learning, and changing within and without the Columbia College gates, Natasha carries endless lessons from her time on Columbia College Drive. Her grandfather, as a deeply involved member of the Eau Claire community, taught her the importance of teamwork and utilizing opportunities to move forward. These lessons push her forward even today, as she continues to chase her dreams the way she was always taught: ruthlessly, but with poise and humility. In December, Natasha became what she calls, “a true alumna,” as a part of a tradition and community unlike any other. Natasha Seymore, the Columns are calling you home.

‘Did not give up’: Three sisters graduate from CC with MBAs on the same day

ROCK HILL, S.C. — They’re years apart in age, but three local sisters graduated with master’s degrees from the same college -- on the same day. Chelsea, Shantel, and Sheena Bell have been taking care...

After 167 years of providing outstanding educational opportunities for women on campus, Columbia College has fully integrated men into their residential experience. August 19 was a monumental day, as...

Columbia College is happy to announce our very own Kennedy Herndon is a 2020 Mayor’s Fellows student. The Mayor’s Fellows program was launched by Mayor Stephen K. Benjamin to foster a continuing investment in developing youth leadership in the City of Columbia.

Columbia College senior, Bre Norton, is making a difference in the Columbia community through service and a commitment to social justice. She's purchasing and receiving donations to provide snacks and drinks to local protestors.